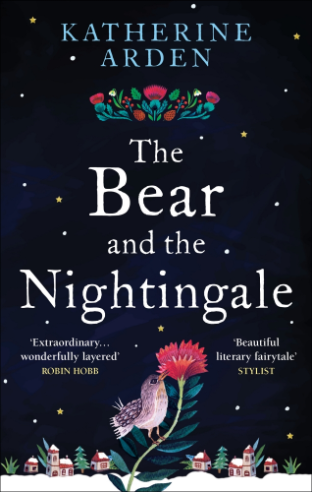 The story takes place in the midst of winter in Northern Russia. Dunya, a loyal elderly servant to the household of Pyotr Vladimirovich, narrates fairytales, folklores not excluding the ill-omened tales of the Winter King to the children. As these events continue, Vasya, the last-born of Pyotr’s children realizes that these stories have layered truth in them and that magic is at play deep in the woods.

The Bear and the Nightingale’s writing was lovely for a debut. I highly respect the fact that the author: Katherine Arden did her research on Russian history and introduced terminologies in a non-info dumping way. The book as a standalone is enjoyable from start to finish but I felt that the story was mapped out in a predictable way. This is probably because YA stories have always overused certain themes which make this one feel like a “paint by numbers” plot. This leads me to my view on the themes covered in this book. I advise you to divert your attention away as spoilers are ahead.

“Love” is a fundamental theme here and it was what brought the Vladimirovichs together and ironically set them apart. “Love” was tested, especially after the passing of Pyotr’s late wife: Marina, yet it was through her memory that he kept his head leveled from depression and raised his children. The theme of “love conquers all” was what led to his demise as he threw himself at “the Bear” to save his children.

“Religion” is a main theme which is embedded in the Russians’ people’s lives, consistently questioning if the paganist-like practice of pleasing house fairies should be discarded and follow the faith of Christianity in full throttle or else all hell will break loose. As the story goes on, we are introduced to the Priest: Father Konstantin Nikonovich, who takes it upon himself to play up the role of God’s messenger corrupted the peaceful days of having religion co-exist with traditions by fueling the villagers with fear of God and His wrath. This resulted in Christianity being depicted in a negative light.

I felt that the supporting characters: Pyotr, Marina, Kolya, Sasha, Olga, Alex, Anna & Irina were all compartmentalized by their stereotypical dynamic with each other and they lacked growth. Although Vasya is the main character, she didn’t display much growth either. It felt like character was molded into an existing arc type.

All in all, it was an easy read and I appreciated that this story didn’t fall victim to our politically correct times. As the story is based on a timeline taking place centuries ago, each child was predisposed by his or her gender. The males are portrayed as breadwinners and females as caretakers who were expected to be betrothed by their mid-teens and if they don’t sought out for marriage they are sent to a convent. I look forward to reading the sequel: “Girl in the Tower”.